I just keep going, week five from 2018 is done!  The prompts were: patisserie, tarot or playing card, curtain, compass, denim/blue, picnic and mosaic. 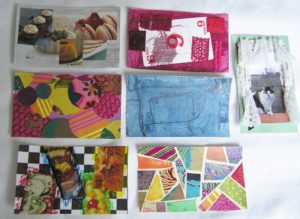 I remember while attempting the challenge last year, that this week was the one that derailed me.  I completed patisserie, playing card and compass, and let myself get hopelessly stuck on the rest of them.  It almost happened again in my bid to belatedly finish the bunch.  The remaining four cards that I needed to make to finish week five, I did in the last day and a half.  Yes, I know, the point of a daily project is to do a little, well, daily… I’ve said it before, starting and maintaining a good habit can be just as difficult as stopping and staying off of a bad one.  I must admit, in the end, the card in this group that I had the most trouble starting is the one that I like the best –  the one on the far right, for “curtain.”