I will get to the trial piece that I talked about last post – later this week, I promise.  Today, I want to share a couple of  4″ squares that I made while listening to opera.  The Metropolitan Opera is streaming a different opera performance daily during this coronavirus shut down.

The square on the left was made while listening on the radio to the Saturday afternoon broadcast of Puccini’s  Tosca.  The square on the right was created while I watched Dvorak’s Rusalka last night.  My process was to first listen and/or watch for about 15-20 minutes.  Then, I started picking out my fabrics from my scrap stash.  I kept on listening while arranging and rearranging the fabric bits that I selected.  After I had the pieces placed, I listened for another bit of time while deciding how to stitch the square, then commenced the stitching.  Of course, last night I stopped work frequently to watch the action on my computer screen, and made mental notes from some of the stunning costumes.  I finished the squares by the final curtain, but I was certainly not trimming or stitching during the entire opera performance.  Even when I am not trying to multi-task, I spend a fair amount of time on my art quilts in a thinking mode before I take action on them.

Now, I would never expect anyone to correctly guess the piece of music that was playing while I made one of my collages, but I enjoy linking the music that inspired me to the visual art as a part of its story.  It would be fun to get a few other artists together to create their own individual responses to the same piece of music.  Check back on Thursday for my progress on last week’s experiment.

Music is incredibly important in my life, and even though I have not played an instrument since high school, it is crucial to my well-being and I’d like to think that it has an influence on my visual art.  I listen to a wide range of musical genres, and I enjoy discovering new sounds.  Every once in a while a new-to-me song or musician comes along that first hits me with an electric jolt, then melts into my mind with the deliciousness of liquid chocolate.  I had one of those musical magic moments last weekend.

First of all, the 1960s and 1970s music scene is generally not my cup of tea.  Especially not the more popular singers and bands.  The singer whose sound sent me reeling recorded two albums in the early 1970s and was relatively unknown (at least in the U.S.) until a documentary was made about him in 2012.  Being perpetually behind the times, I did not discover the documentary until last week, when I made a dash to stock myself with a few DVDs on my last day of work before the Great Coronavirus Shut Down.  This isn’t a review of the movie, or a summary of the life of Rodriguez, but I highly recommend the movie (Searching for Sugar Man) and you can read a bit about the fascinating story at sugarman.org.

This is about the shock wave that hit me as I listened to Rodriguez’s songs throughout the movie.  Some of his lyrics are very much tied to the time when they were written, and steeped in angry protest.

“Cause they told me everybody’s got to pay their dues

And I explained that I had already overpaid them.” (“Cause,” Coming from Reality)

Some of his lyrics transcend time and hit life experiences that all of us go through.

“I wonder how many plans have gone bad…

I wonder about the loneliness that’s mine” (“I Wonder,” Cold Fact)

Some lines were a raw nerve, something that we’ve thought, but wouldn’t even admit it to ourselves, other lines were fairly simple sentiments that we overlook for being too obvious.

“Treasure what you’ve got, soon you may be caught without it.”  (“Inner City Blues,” Cold Fact)

We all need to be reminded of the obvious thoughts and the raw nerves from time to time.  I’m still stunned that this product of 1970s counterculture has appealed to me.  I’ve watched the movie four times now and I’ve been playing a few songs over and over on Youtube, and I am trying to remember that jolt of surprise that I felt while hearing the songs for the first time.  How does one describe that to another?  Each one of us experiences a song, movie, work of art, etc. in different ways.  I have often found that we can more easily describe what we don’t like, but struggle to explain something that we love.  We don’t like everything that we see or hear, and not everyone is going to like a particular work of art, and that’s to be expected.  There is so much out there, and I wonder what I’ll discover next.

Lyrics quoted written by Rodriguez from the albums Cold Fact (1971) and Coming from Reality (1972).

Here in Ohio, the coronavirus has caused a multitude of event cancellations, and the list seems to grow by the hour.  I’m not going to get on a political soapbox about the response to the virus, other than to suggest that if you suddenly have some spare time due to event, school or work closure, take the opportunity to learn something new. 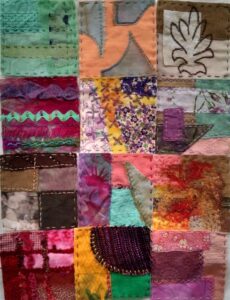 Turn off the TV, turn off the news, get off the internet for a little while, (after you finish reading this post, of course!) get out your needle and thread, or pencil and sketchbook, or any tools or supplies that you’ve had sitting and make something!  If you’re like me, you might have a stack or two of craft books that are begging to be read.  Pick out a book, open it and start a project from one of those books.  Think about the creative skills that you have mastered, and take some time to teach it to someone else.  Making something or expressing yourself creatively is a great escape from the troubles of the world.  With, that I am off to escape from my laptop and get lost in some stitching.

I’m certain that I have a series about the people, places and things that influence and inspire my artwork on my old Blogspot blog, but I need to begin again here.  I’ve hinted here earlier at one thing that inspired me to start making boxes, but there is more to my boxes than a Steinbeck quote.

While traveling two-lane by-ways and backroads, I have cultivated a fascination with run-down, abandoned buildings.  There are so many untold stories hidden in the crumbling walls, fallen fences, twisted signs and rusted metal.

Over the years, I have collected many photographs from my travels of all sorts of weathered and forgotten structures, from the farm lanes of Southeast Ohio to the windswept deserts along Route 66.

Broken windows, crumbling brick, gaps in wood planks, precarious listing to one side, patched holes, bent framing… the wear and tear of old buildings is visual poetry to me.  It wasn’t until I had completed several of my small fabric boxes that I realized I was subconsciously capturing architectural decay in them. 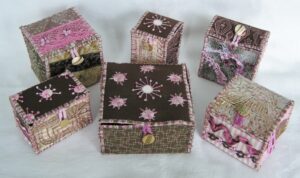 The boxes began where other projects ended.  The first boxes that I made used scraps from other fabric collages, and my decision to embellish each side independent of the others further conveys the spirit of dilapidated structures.  The process of pulling the box sides up and hand stitching them creates subtle warping, twisting and bending, completing my interpretation of things that are run down.  I love making them, and I like to think of them as little shrines to the past.

Each season out here has its own particular charms that intrigue me.  Right now, it is being able to see the gentle rolling of the land without piles of wild brush and lushly leafed trees hiding the topographical details.  The branches of the same trees are wrapped with feathery blue-gray lichens, unnoticed in the spring and summer months.  When the cold winds whip through the valleys, I stay in and stitch the summer flowers to keep warm thoughts of the growing season in my mind. 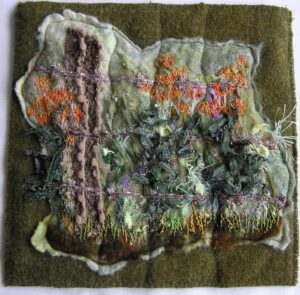 There are certain points along the property where I live that I visit frequently to note changes as the season roll through the year.  At the end of my long driveway is one of those points.  Across the road is a neglected cow pasture that fills out in summer with a riot of wildflowers: soft purple chicory, Queen Anne’s Lace, blaze orange butterfly weed, mullein reaching to the sky, jewelweed, and sometimes a bright red Canadian Lily. 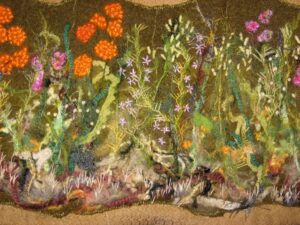 Later in the season, iron weed, Joe Pye weed, goldenrods and asters take over with a different palette of colors and textures.  I have already made several felted and stitched portraits of the fence row, and more are in the works. 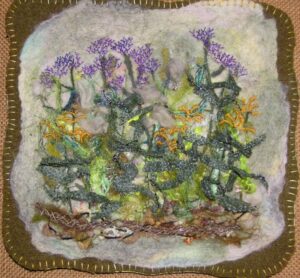 I don’t know if I will ever tire of stitching these roadside meadows.  So many people speed past them, in a hurry to get somewhere, and they never notice the flower show to the side.  It doesn’t show up on their GPS.