Tomorrow is the last official day of the index-card-a-day challenge, I am indeed going to fall short on finishing 61 cards in 61 days.  I’m still going to finish the last few, just a few days late!  After I get the last few cards made, I will pick up were I left off on my attempts at the challenge in 2017 and 2018.  My goal is to get five cards done a week until the gaps are all filled in.

I have learned a lot by doing the ICAD challenge, and I have gotten some new ideas for art quilts.  Some of the prompts were really tough for me to complete, as I had great difficulty in coming up with an idea.  Along the way , I learned a couple of new words, tried new art supplies and learned how to (or not to) combine various art media.  In the next couple of weeks, I will feature a few individual cards and discuss the process in creating them, and show a few that have inspired me. 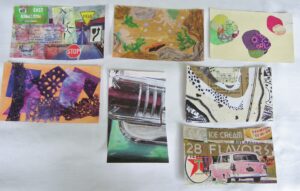 Check back on Thursday for a quilt show announcement.